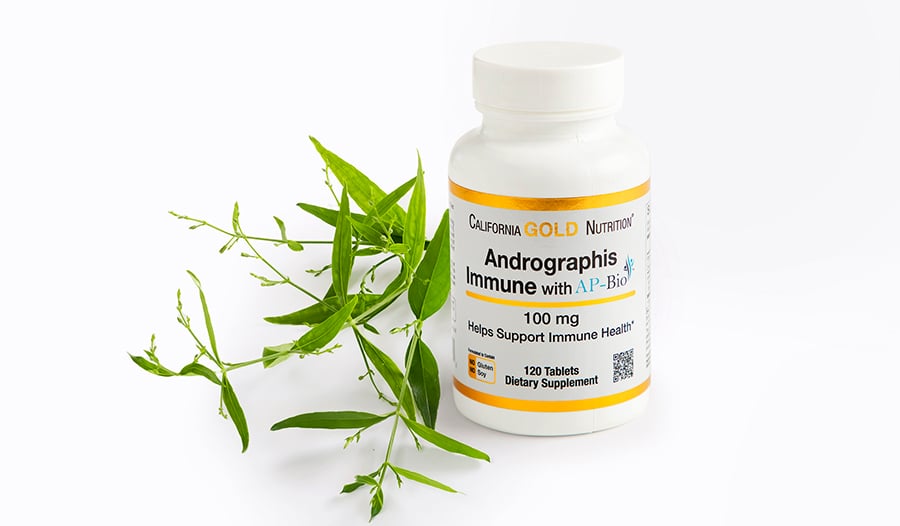 Andrographis (Andrographis paniculata) is an herb that grows throughout Asia. It is used in both Traditional Chinese Medicine and Ayurveda. It has been referred to as the "Indian echinacea" in Western cultures because of its similar use in supporting immune health. Significant scientific support exists for Andrographis extracts rich in andrographolide, the active compound responsible for the plant's health benefits. While the focus of the research has been on its beneficial effects on immune function, Andrographis extracts have also shown many other effects in supporting good overall health.1

There have been over forty clinical studies with Andrographis preparations showing an ability to improve immune function. In a meta-analysis of controlled human studies in adults and children with acute respiratory infections, researchers concluded that using Andrographis may help to improve such symptoms as a sore throat, runny throat, nose, and respiratory tract congestion.2

One double-blind, placebo-controlled clinical study evaluated the benefits of an extract of Andrographis (standardized to contain >30% andrographolide) in 223 subjects with symptoms of the common cold (cough, runny nose, headache, fever, sore throat, earache, malaise/fatigue and sleep disturbance).3 The test subjects received either AP-Bio® (200 mg/day) or placebo for five days. The Andrographis extract showed a significant reduction in overall symptom scores at day five compared to the placebo group and was without side effects. The comparison of the overall efficacy of the Andrographis extract was 2.1 times (52.7%) higher than placebo, indicating high effectiveness in reducing symptoms of the common cold.

The popularity and extensive awareness of the immune-supportive effects of Andrographis in the common cold led it to become even more popular in outbreaks of other types of viral infections in Asia. The most significant development occurred in late 2020 when Thailand's Health Ministry approved the use of Andrographis for mild respiratory symptoms like cough, runny nose, and sore throat. Like other antiviral agents, the best results show when Andrographis is given as soon as possible in a viral challenge. The Thailand Health Ministry cited a study that led to its approval of use suggested patient conditions improved within three days of the treatment without side effects if the medicine is administered within 72 hours of testing positive. More than 11,000 inmates at prisons in Thailand participated in the study. The results were so impressive that in August 2021, the Thai government ordered prisons around the country to cultivate the plant for immediate use in preparing inexpensive Andrographis tablets for the prison population.

More detailed clinical studies are in the works with Andrographis. The largest trial is expected to be completed by May 2022. It involves more than 3,000 participants, so it is an extensive study. It compares Andrographis extract with standard care in people with positive tests for a viral infection but without symptoms. The dosage used in this trial delivers an andrographolide content of 60 mg taken three times per day before each meal for five days. The primary outcome will be on which group develops the most severe symptoms.

Andrographolide is a bitter compound in Andrographis that has emerged from the scientific investigation as the most active compound of the plant and its extract. Andrographolide has shown many effects on immune function believed to be responsible for the benefits of Andrographis in supporting immune function during viral challenges, especially the common cold. In addition to immune-enhancing activity, andrographolide may help protect lungs from damage during infection as well as some specific antiviral activity.4,5

Many viruses produce proteases that allow them to infect human cells. It is well-established that compounds that inhibit viral proteases inhibit the entry of a virus into a human cell. Andrographolide has been shown to inhibit viral proteases. In fact, against some specific viruses, andrographolide suggested more excellent inhibitory action than other compounds in this regard.5,6

Andrographolide also exhibits other antiviral effects, including inhibiting some aspects of viral replication and certain viruses' ability to use their specific proteins to attach to receptor sites on human cells, allowing the virus to enter the cell.5,6

Andrographolide exerts several significant immune-enhancing effects.5 For example, it enhances the production of a type of white blood cell known as a natural killer cell or NK cell.

Andrographolide also enhances the action of another type of white blood cell known as a T helper cell. These cells are critical in producing an effective immune response. T cells have essential chemical compounds that activate the immune system, including antiviral compounds like interferon.

Andrographolide has been shown to strengthen the gastrointestinal barrier and reduce intestinal "leakiness" by increasing the growth of a very important microorganism – Akkermansia muciniphila.7 This bacterium works with the cells that line the intestines to produce the mucin that protects the gut lining from damage. For example, it also activates cells known as M cells in the intestinal lining are also critically important in regulating the junctions between intestinal cells through actions on tight junction proteins that hold the intestinal cells together.

Under normal circumstances, the small intestine lining is nearly leak-proof (impermeable), and only fully digested food molecules are permitted to pass through this lining into the bloodstream and lymph vessels. When the gut lining is too permeable or leaky, large quantities of "molecular debris" such as undigested and partially digested food components as well as fragments from microorganisms end up getting into the bloodstream. This causes a great deal of stress upon the immune system, the liver, and virtually every other organ or system of the body. It also leads to inflammation and a wide range of health issues.

Andrographis has generally been used in traditional Chinese medicine and Ayurvedic medicine as a general tonic. This effect on the gut barrier supports this application. The leaky gut syndrome is characterized by gas, bloating, other digestive issues, muscle or joint pain, fatigue, irritability, lethargy, mood swings, poor concentration, memory difficulties, sleep disturbances, and other problems.

Research has also shown that Andrographis extract improves the anti-inflammatory response by naturally activating a signaling protein (PPAR-gamma) that inhibits the formation of a critical promoter of inflammation (NF-kappa B).8 The result of these actions is reduced production of inflammatory compounds in the body. These effects are put to good use in supporting the body's response to inflammation wherever that inflammation is occurring. For example, clinical studies have shown Andrographis extracts to promote joint health by decreasing swelling and pain in the joints and reducing cartilage damage. It also improves clinical scores for joint stiffness, physical function, and fatigue.9

There are no known side effects or drug interactions at the recommended dosage levels. Even at dosages much higher than typically used, Andrographis does not produce any adverse reactions in healthy subjects.

This article was written by Dr. Michael Murray, iHerb's Chief Scientific Advisor. For over three decades, Dr. Murray has been a thought leader, author, and expert in nutrition, dietary supplements, and natural products. He has published more than 30 books, including the bestselling Encyclopedia of Natural Medicine, now in its fifth edition, which has been used by over 100,000 health care professionals across the globe. Learn more about him on DoctorMurray.com or his iHerb Page.

Previous Article
Respiratory Infections in 2022—Here's What You Need to Know
Next Article
The Best 5 Natural Approaches to Indigestion, According to a Naturopathic Doctor

20,114 Views
Whether you're concerned about gut health, immunity, fitness, or more, a naturopathic doctor offers recommendations for supplements to address common health concerns.